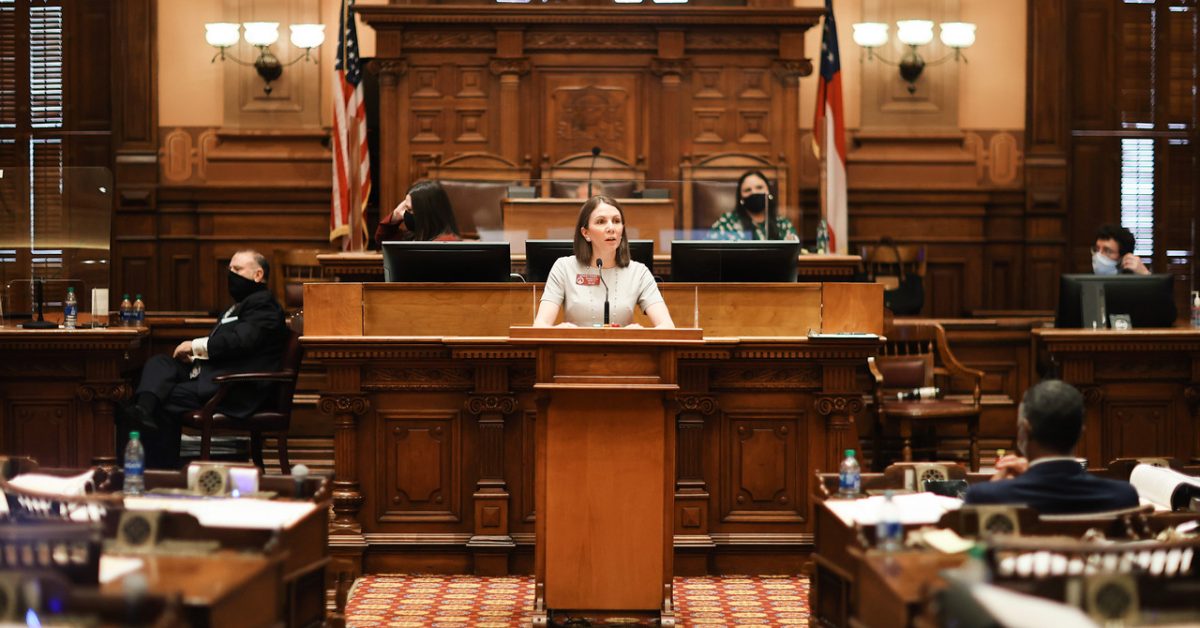 2 DAYS LEFT! Next week is the final week of the legislative session. Monday is Day 39, and Wednesday is Day 40 (Sine Die!). Bills are moving quickly and being amended and substituted even faster. It will be interesting to see what makes it to the Governor when it is all said and done next Wednesday.

As many of you have likely already seen, this week will go down as a sad chapter in Georgia’s history books. The House and Senate both passed the omnibus voting bill. It passed both chambers and was signed by the Governor (behind closed doors) all within hours. Now the fight against these changes moves to the court system. In the meantime, we will prepare to fight and win elections no matter what the rules. No matter the rules, we will vote, and we will win!

I was proud to support SB 33, which creates a cause of action for survivors of human trafficking to recover damages and attorney’s fees against the perpetrator. The statute of limitations would be 10 years after the cause of action arises or when the survivor turns 18 if they were a minor at the time. This bill also authorizes the Attorney General to bring a lawsuit against a perpetrator when the interest of the citizens of this state is threatened or adversely affected by the perpetrator on behalf of the state.

SB 34 passed unanimously. This bill allows for survivors of human trafficking to petition for a name change under seal. Generally, if you want to change your name, it is a very public process on the record and in newspapers. This bill prevents this and allows survivors to change their names privately outside of the watchful eye of their traffickers.

SB 218 suspends public officials’ compensation while they are suspended from office due to a felony indictment. That is a good bill. But this bill was amended to add HB 411, which creates the Prosecuting Attorneys Oversight Commission. That is not a good bill. It creates unnecessary bureaucracy of unelected appointees who would have the power to remove district attorneys and solicitor generals. Prosecutors are already subject to oversight by the Courts, the Legislature, and the State Bar. This “oversight commission” would have the power to discipline and remove prosecutors when complainants don’t like the kinds of cases they are bringing or not bringing. It is an attack on prosecutorial discretion. The commission will have eight members who will serve on one of the two distinct panels – an investigative and a hearing panel. The five-person investigative panel is responsible for investigating whether District Attorneys and/or Solicitor-Generals are in violation. The three-person hearing panel, which serves as the commission’s adjudicating body, will issue recommendations and advisory opinions. The commission will send their findings to the Supreme Court of Georgia to determine whether a District Attorney or Solicitor-General violated Georgia Rules of Professional Conduct. The bill also outlines which information collected through the investigation and hearing will be confidential.

I voted against this bill and spoke against it on the House Floor. Watch my remarks HERE.

SR 134 proposes a constitutional amendment to suspend public officials’ compensation while they are suspended from office due to a felony indictment. Public official refers to the Governor, Lieutenant Governor, Secretary of State, Attorney General, State School Superintendent, Commissioner of Insurance, Commissioner of Agriculture, Commission of Labor, or any General Assembly member. I voted for this measure. Georgia is currently paying two former insurance commissioners who are under felony indictments.

SB 47 is the expansion of a voucher program for students with an Individualized Education Program (IEP) Plan or Section 504 Plan (504 Plan) through the state’s existing Georgia Special Needs Scholarship Act. Several new categories of eligible students were added, which expands the program before any study or transparency is added to the program. The bill would allow families to use state education dollars for uniforms, athletics, and other items not provided for parents of public schools. Further, the bill would require families to waive their rights to accommodations and their rights under the Individuals with Disabilities Act. There is no accountability for the public money spent in this bill.

I voted and spoke against this bill because I do not believe in diverting public funds to private schools with zero accountability for those funds. You can watch my remarks HERE.

SB 153 would direct the Georgia General Assembly to study alternative education models and funding focused on dropout prevention, high school credit recovery, and other education services of adult and incarcerated students for the next two years. This bill would also require system-collaborative state charter schools to transition to alternative charter schools, which specialize in dropout prevention and high school credit recovery programs, in order for the schools to continue to receive the state charter supplement funding. I voted yes.

SB 159 passed, which allows alternate transportation vehicles for schools. We passed a House version earlier this session, but with the end of the session looming, this one moved faster through the committee process. I supported both bills.

The House unanimously passed legislation this week to ensure that Georgia students with disabilities do not miss out on HOPE Scholarship opportunities and funding. Under current law, students receiving the HOPE scholarship have ten years after graduating from high school to use their HOPE eligibility. SB 187 allows students with a disability, as defined by the Americans with Disabilities Act, to make an application to the Georgia Student Finance Commission to have that deadline waived. If the deadline is waived, the student has until the time (1) the student has earned a bachelor’s degree or (2) the student has attempted to obtain a total of 127 semester hours, whichever comes first.

SB 202 passed the House Floor and subsequently was agreed to by the Senate. I voted NO! Later in the evening, in a closed-door ceremony, GOP leadership who railroaded this bill through gathered to watch Governor Kemp sign it. This bill will continue to be fought everywhere, from the courts to the ballot box. As Rep. Burnough said in her remarks against the bill, we need to go ahead and make a plan to vote NOW.

Here’s what the bill does:

* Special thanks to Fair Fight and the Georgia House Democratic Caucus for putting together this list. *

SB 6 allows for the study of up to 5 requests each year for economic analysis of existing law or proposed law on a particular tax benefit such as tax exemption, tax credit, or preferential tax. Such financial analysis will contain a five-year study of a net change in the state’s revenue and expenditures and the change in economic activity and public benefit.

SB 6 also adds in the language from SB 148. It creates the 2021 Special Council on Tax Reform and Fairness for Georgians to conduct a study of the state’s current revenue structure and recommend legislation to the Speaker of the House and the Lieutenant Governor no later than January 10, 2022. This Code section will be repealed on July 1, 2023.

This bill also adds HB 587, which creates job tax credits and extends sunset dates for other tax credits. SB 6 includes HB 586, which relates to the exemption of several sales and use taxes, including an exemption of sales and use taxes for sales of tickets, fees, or charges for admission to a fine arts performance or exhibition conducted in a facility owned by a 501(c)(3) organization or a museum of cultural significance and would sunset December 31, 2022. This will help our arts community, which is still unable to open for performances because of COVID-19. I voted yes for the bill.

SB 145 allows for 3 ounces of distilled spirits with a maximum of 2 drinks to be picked up for carrying out from restaurants. This bill requires specific containers as well as requirements for transportation of the beverages from the establishment. I voted yes.

SB 32 protects federal and state employees by preventing their private information from being public. This includes personal mobile or wireless phone numbers and the home addresses on publicly available rosters of licenses and applications maintained by the division directors of professional licensing boards. I voted yes.

Families that have lost a loved one due to COVID are eligible for funeral expense assistance through FEMA. Expenses from COVID-19 related funerals incurred between January 20, 2020, and December 31, 2020, can be reimbursed with the appropriate documentation. While some details are being finalized, I encourage you to gather and keep all documentation you can so when the program is up and running, you can apply. Please visit the FEMA website, HERE, for more information.

HERE is a link if you need to get tested.

DPH has an interactive dashboard for vaccine distribution in our state; you can view that HERE.

Large hospital systems that received vaccines are also scheduling appointments. Many large hospitals are vaccinating their patients, including Emory, Wellstar, and Piedmont.